Check out my IG @joebrenttenor

Posted by Joseph Michael Brent at 5:35 AM No comments:

This is the third video of my recitatives!
Hope you have enjoyed this tutorial.
Best wishes,
Joe
Posted by Joseph Michael Brent at 1:41 PM No comments:

This is the second video of three of my recitatives!
LET'S LEARN SOME RECITATIVI
Hope you're enjoying these tutorials.
Best wishes,
Joe
Posted by Joseph Michael Brent at 1:41 PM No comments:

There has been so much going on, and I've been regrettably out of practice in updating this blog - though, I have no hubris to imply that I ever was in practice.

In February, I was contracted to sing Pang in Maryland Lyric Opera's Production of Puccini's Turandot. It was a perfect segue back into performing after at two year hiatus.

In March, I sing for the Metropolitan Opera Guild and playing bass in New Jersey Lyric Opera's production of La Boheme.

Musically speaking it has been an absolutely marvelous way to get things back on their feet. I am happy to also share that in the fall of 2021 I was invited (and accepted) to be on the roster of the burgeoning Artist Management company Atwater Reed Artists.

In May I will be heading down to Maryland yet again to sing Don Basilio in Le Nozze di Figaro with MDLO, and an outrageously fantastic cast! Later in the year I will be singing Des Grieux in Manon with the Taconic Opera.

*In one of the videos I mention an incorrect date. Le Nozze was premiered on 1786 not the 1760's (Mozart was precocious, but being born in 1756 would have made him barely ten going on my mistake)
Posted by Joseph Michael Brent at 1:19 PM No comments: 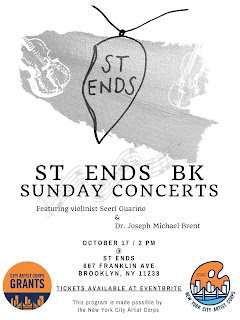 A special premiere performance of 3 pieces by Giovanni Bottesini, arranged for guitar, violin, and tenor. Arrangement by yours truly.

Yes, I will be singing, playing double bass, and guitar. I will be joined by Seeri Guarino, on violin.

The concert will also feature music by

Tickets are free, but required! Limited seating. Tickets available through link below:

Posted by Joseph Michael Brent at 8:38 AM No comments:

What is there to say?

Are you also feeling the utter bleak portent of this effete system?

Perhaps you are relieved by the election results, or maybe you're disappointed by the results? It's possible that the blight of the global pandemic hasn't devastated you.

While in a self-imposed quarantine because my partner tested positive for the corona virus, I have been listening to a lot of cello music.

Enjoying Elgar's today:
https://open.spotify.com/track/3LmQaKAO6LAjEd5EEqFFoa
One of the first CD's that I ever purchased was the Virgin Classics Steven Isserlis, London Symphony Elgar Concerto/Bloch Schelomo conducted by Richard Hickox (1994).
I listened to it with such joy, and such indiscretion that it took me years to distinguish between the two pieces.
The same fate befell me with two other recordings: the Deutsche Grammopho -Universal re-release of Krystian Zimermann Schumann/Grieg Concerto with the Berlin Philharmonic, Karajan conducting
and - this one hurts -
the Seraphim LP of Menuhin playing Brahms and Beethoven with Furtwaengler and the Lucerne Festival orchestra)
Posted by Joseph Michael Brent at 3:18 AM No comments:

A memory of Thais

I hope you are all staying well. As my work on a small project continues I was reminded of a post on the OperaGene blog that I was featured in.

Here is a link to the blog http://operagene.com/new-blog/2020/1/29/why-maryland-lyric-operas-thas-a-young-artist-perspective.

Be sure to give OperaGene a few hits of traffic, in the mean time: below, I've copy and pasted the page.

Tenor Joseph Michael Brent obtained a doctoral degree from the University of Georgia in 2014 and in 2018 spent a period training in Maryland Lyric Opera’s Young Artist Institute.  He has appeared in several MDLO productions since then and after a concert appearance in 2019, I wrote “I thought Mr. Brent was good when first I heard him a year ago.  He is now even better, a career worth following.  Kudos to him and to the MDLO team.”  He will play the role of Nicias in the upcoming MDLO performances of Thaïs.  His answer to the question posed in my previous blog report came in too late, and perhaps in too much detail, to be included there.  However, it was much too interesting not to use.  Here is a young artist’s response to my question.
Why did you decide to make Thaïs part of your life?
My decision to make Thaïs a part of my life was multivalent.  Until I was contacted by Maryland Lyric Opera, Thaïs had never made a blip on my professional radar.  I had written transcriptions of the Thaïs meditation for double bass, and as a duet for double bass and violin, but never conceived that I would be singing Nicias, a role that I have come to adore.  Thaïs is not standard repertoire, and as there is no proper aria for the tenor (Nicias), there wasn't previously any powerful impulse to engage with the score. In an effort to streamline my answer, I would like to simply state that when the Maryland Lyric Opera calls I pick up; if MDLO inquires or offers a role, I consider it. I have ineffable appreciation, respect, and trust in the tight-knit team of artists who are at the helm of this company.  Mr. Brad Clark (President and Founder), Matthew Woorman (General Manager), and Maestro Salemno (Music Director and Conductor) are a powerhouse triumvirate forging an impressive opera company, one that I am grateful to work with and for.  They take care of their artists, and they prioritize great music making: what more could you want from an opera company?
Though I fear any display of hubris, I'll hazard to admit that I have come to personally identify with this character. I also have found that Massenet's setting of Gallet's text feels well suited to my voice, individual subjectivity notwithstanding. Nicias is an armchair philosopher, iconoclast, fatalist, epicurean, and dare I say hedonist; he takes people at their word and celebrates aestheticism over asceticism. I also find the underlying contention of the opera - the drama that percolates between Thaïs and Athanaël, and the provocative questioning of faith, paganism, and lust - fascinating, and engaging. Much of the music is quite beautiful, and Massenet's use of associative musical gesture at times is nearly “leitmotivic”. The [013] trichord (three note grouping), for example, is heard melodically and harmonically throughout the opera during scenes that feature Athanaël. You will hear this unmistakable cell used “motivically” by the orchestra in his first entrance. The two-bar phrase is actually a statement of the [013] trichord in one bar, followed by an inversion of the same trichord in the second bar, together creating a haunting affect. Other statements of this motive cell are rather recondite."
In summary, I chose to make Thaïs a part of my life because accepting this contract meant that I would be working with a great company (run by inspired artists), singing a role suited to me, exploring a relatively obscure opera, being surrounded by fantastic artists (on stage, off stage, and in the pit), offering something special to the audience, and - not least of which - earning some money to eat, pay my rent and student loans. I have to emphasize that working with Claudia Zahn (Thais Director) is an absolute treat, she is fantastic. I would be remiss if I did not include both Sam Fleming (Thaïs Costume Design) and Anne Nesmith (Thaïs Wig Design), who have contributed to making a beautiful show. Their amiable and brilliant personalities are perfect complements to their professional skill, a true joy to know these three artists. The high quality of person and artist that this company employs, from management to the pit, create an atmosphere that is an exhilarating delight both artistically and professionally. Tenor Joseph Michael Brent, who plays Nicias.
The Fan Experience: Mr. Brent makes a cogent point in his last paragraph not mentioned by others.  A singer must also be able to put food on the table.  If we want to continue watch and hear young artists entering opera careers, we have to support them by attending performances.  MDLO is making that possible.
Thanks for reading. Stay safe y'all
Best, Joe
Posted by Joseph Michael Brent at 12:51 PM No comments: